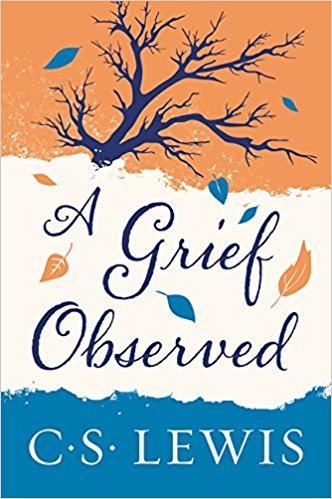 This is the first book I read after Tinsley died, and I’m forever grateful for it.

No one ever told me that grief felt so like fear.  I am not afraid, but the sensation is like being afraid.  The same fluttering in the stomach, the same restlessness, the yawning.  I keep on swallowing.   At other times it feels like being mildly drunk, or concussed.  There is a sort of invisible blanket between the world and me.  I find it hard to take in what anyone says.  Or perhaps, hard to want to take it in. pg 3 (first page)

There are moments, most unexpectedly, when something inside me tries to assure me that I don’t really mind so much, not so very much, after all…Then comes a sudden jab of red-hot memory and all this ‘commonsense’ vanishes like an ant in the mouth of a furnace. pg 4

Her absence is like the sky, spread over everything. pg 11

When I speak of fear, I mean the merely animal fear, the recoil of the organism from its destruction; the smothery feeling; the sense of being a rat in a trap.  It can’t be transferred.  The mind can sympathize; the body, less.  pg 13

It is hard to have patience with people who say, ‘There is no death’ or ‘Death doesn’t matter.’ There is death.  And whatever is matters.  And whatever happens has consequences, and it and they are irrevocable and irreversible.  You might as well say that birth doesn’t matter.  I look up at the night sky.  Is anything more certain than that in all those vast times and spaces, if I were allowed to search them, I should nowhere find her face, her voice, her touch? She died.  She is dead.  Is the word so difficult to learn? pg 15

You never know how much you really believe anything until its truth or falsehood becomes a matter of life and death to you.  Only a real risk tests the reality of a belief. pg 23

Time itself is one more name for death. pg 25

Reality never repeats.  The exact same thing is never taken away and given back. pg 26

Time after time, when He seemed most gracious He was really preparing the next torture…. [but] is it rational to believe in bad God? pg 30

Why do I make room in my mind for such filth and nonsense?  Do I hope that if feeling disguises itself as thought I shall feel less?  Aren’t all these notes the senseless writhings of a man who won’t accept the fact that there is nothing we can do with suffering except to suffer it?  Who still thinks there is some device (if only he could find it) which will make pain not to be pain.  it doesn’t really matter whether you grip the arms of the dentist’s chair or let your hands lie in your lap.  The drill drills on.  pg 33

And grief still feels like fear.  Perhaps, more strictly, like suspense. Or like waiting; just hanging about waiting for something to happen.  It gives life a permanently provisional feeling.  It doesn’t seem worth starting anything.  I can’t settle down.  I yawn, I fidget, I smoke too much.  Up till this I always had too little time.  Now there is nothing but time. Almost pure time, empty successiveness. pg 33

It’s not true that I’m always thinking of H. Work and conversation make that impossible.  But the times when I’m not are perhaps my worst.  For then, though I have forgotten the reason, there is spread over everything a vague sense of wrongness, of something amiss. pg 36

Bereavement is a universal and integral part of our experience.  pg 50

Grief is like a long valley, a winding valley where any bend may reveal a totally new landscape.  As I’ve already noted, not every bend does.  Sometimes the surprise is the opposite one; you are presented with exactly the same sort of country you thought you had left behind miles ago. That is when you wonder whether the valley isn’t a circular trench. But it isn’t.  There are partial recurrences, but the sequence doesn’t repeat.  pg 60

Five senses; an incurably abstract intellect a haphazardly selective memory; a set of preconceptions and assumptions so numerous that I can never examine more than a minority of them – never become even conscious of them all.  How much of total reality can such an apparatus let through? pg 64

Am I, for instance, just sidling back to God because I know that if there’s any road to H., it runs through Him?  pg 68

Can a mortal ask questions which God finds unaswerable? Quite easily, I should think.  All nonsense questions are unanswerable.  How many hours are there in a mile? Is yellow square or round? Probably half the questions we ask – half our great theological and metaphysical problems – are like that. pg 69

Didn’t people dispute once whether the final vision of God was more an act of intelligence or of love? That is probably another of the nonsense questions. pg 76 (last page)